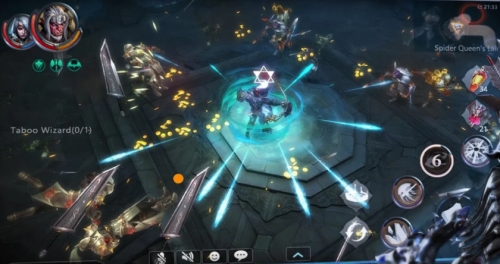 Raziel: Dungeon Arena is an ARPG game in which players use high-end heroes, where they play versus other players or together and where they need to raid the enemy and defeat him. The game also uses bosses which are difficult to defeat but they do come with their own set of appeals. Co-op feature allows you to explore and fight with your friends in real-time.

Your enemy is on his last leg. Swap out your mage for your warrior in real time and deliver the battle’s decisive blow! Welcome to Raziel: Dungeon Arena, a game of single player dungeons with co-op raids you can play anytime or anywhere; collect new heroes that command unique attacks; craft epic gear sets by raiding the dungeon depths and collecting rare items like scrolls which allow players to trade resources between others who have raided more often than them (or share their abilities); save the world from its demon plight – but be warned it won’t come easy!

Raziel is an immersive ARPG for your mobile device, whether you prefer to conquer solo quests or hunt with friends in multiplayer co-ops. With 60+ solo dungeons and raiding parties on the horizon, Raziel offers dungeon delvers of all types a hardy challenge.

Single player can be a challenge. You need to think fast in order to survive. Bosses use special skills, like stunning you, making it so you can’t move for a little bit of time. Enemies have skills too and they react according to their strengths and weaknesses.

In Co-Op Dungeons, you can explore the world map to find quests. You can also team up and take on dungeons with friends. In co-op Tavern boss battle quests, you and your friends work together to defeat the boss.

You can fight with your friends and other people. You will have a better chance of winning if you work together.

In this game, you can explore a dark world. There are detailed character models and beautiful environments. You’ll also see interesting hero powers. You can explore an environment that is different, like a swamp and a forest.

The soundtrack for this game is long and accompanies you as you hack away at the enemies. This game has a story that is narrated by a voice actor. They also have in-game NPCs with authentic voices. The sound effects are realistic and there are many different ones depending on skills or abilities.