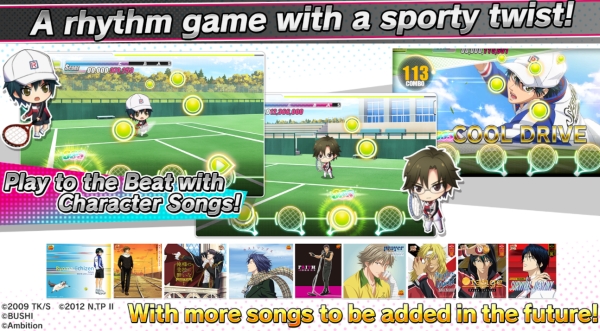 PoTII: RB was featured in July, 2021 of Anime-Style, Music
Download

There are many rhythm games with bad names and PoTII: RB is one of these. Even though the game’s title is a bunch of letters, it is still an alright rhythm game. It has a tennis theme, but that theme works surprisingly well with the design of the game where you will tap on your screen to match up with music that goes from fast guitar riffs to soft piano melodies.

It seems like there was no plan at first when designing what type of gameplay style would work best for such a bizarre concept – which makes sense considering how ridiculous everything about this game feels from beginning until end – but they eventually settled on one that actually does have merit despite being far too easy since it’s at least fun even if it doesn’t try to be anything else other than that.

You can create an order with your favorite characters in it. Then you can play matches where the characters in your order play tennis and you also get to hear a song that is related to the character! The main theme for this game, “Risingbeat,” is also included.