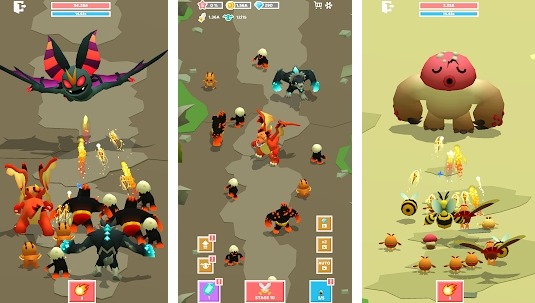 Merege games are the latest trend in gaming, and Merge Monster Evolution is one of those vying for your attention. It has all the same mechanics as 2048 or Threes!.

Monster Battle is a game with RPG mechanics. In this game, you will fight monsters. Collecting and merging are the most important things to do in this game, but sometimes it’s not as fun because it can get boring. It has some problems with monetization too. But there is still some fun to be had with the merge mechanic of Monster Battle if you like that sort of thing.

You can summon monsters with different skills. You need special stones to do it.

Merge monsters to make them stronger. Monsters evolve and look cooler as they change. Collect about 50 kinds of powerful monsters.

You can make your own monster squad! The more monsters you summon and merge, the stronger it will be. Defeat boss monsters with your powerful monster squad.