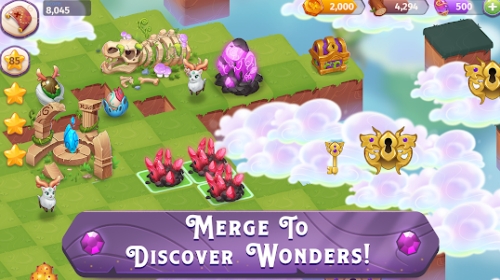 Merge Magic was featured in January, 2020 of Merge, Puzzle
Download

Merge Magic is the newest entry in the famous family-friendly line of games for smartphones. You will enter a supernatural empire that has lots of fantastical creatures and objects to merge as one. As you move forward, you have the chance to create more powerful creatures, bigger objects as well as have more rooms for uniting activities.

You can create magical creatures with the eggs. They will help you solve challenging puzzle levels like matching items to win. Bring the rewards back to your Garden so you can collect them and grow them.

Below is a list of tricks and tips which can assist you maximized your time in playing this game.

This is your plant or factory for wood logs, coins as well as fail. These can be generated in the garden. However, to make more coins and wood logs, you have to unite the creature. You have to follow some missions and tasks to move to a higher level.

Merge to Get Lots of Coins

Once you merge more creatures, you’ll be rewarded with lots of coins. However, you must begin merging creatures without following the listed tasks. Look into the first task and follow it, then begin uniting creature. Doing this can assists you in increasing your level as well as getting lots of coins.

When you create higher levels of creatures, you will become faster, and powerful as well as complete more harvesting work and get magic power to use in unlocking more land. So, merge at least three creatures for you to become more powerful.

Once you press the start button located on the left corner of the home page, you will see the list of the tasks/missions that you have to follow. Doing the mission allows you to reap coins and quests. It is advisable to follow the tasks to speed up the process of going to a higher level.

Earn Rewards in the form of Coins

Like in any mobiles games, coins play a very important role. In Merge Magic, coins can be earned through selling creatures you build, buy from the store, or completing the level.

You have to avoid selling blessing eggs because it helps a lot in getting fairies. Therefore, it just sells those which are rare and hard to build.

It is advisable to explore the world map only if the creatures are resting. During this time, you aren’t able to farm anything in the garden. So, this is your chance to travel around the map.

In every challenge, you can break your record three times, and this will allows you to get coins.

In every task, you need to have one important thing to consider; merging broke idols. In all tasks, you have to unite the merge idol as early as possible. Merging depends on your techniques and power, so ensure your technique is better enough to merge broken idols as fast as possible.

Gather Daily Quest and Get Coins

You can settle on the daily mission. By following the quest, you will receive rewards. It is highly advisable to collect these rewards for future use.

Always keep in mind to complete the first task under the given time frame. While the second and third tasks, you can when you want to complete it.