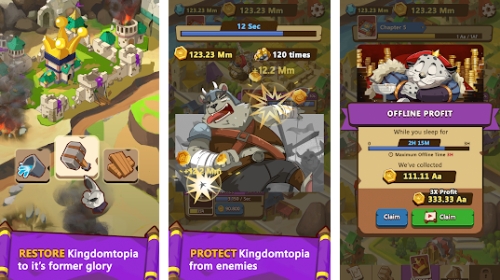 Kingdomtopia: The Idle King was featured in September, 2020 of Clicker RPG, Simulation
Download

Kingdomtopia is an animal kingdom that was almost completely destroyed by an enemy. Now, Pug the prince wants to rebuild the entire kingdom and to make it strong and successful once again. Your task is to do that by rebuilding the areas, economy and so much more.

After living peacefully for years, Kingdomtopia was invaded by an unknown enemy. This war left the entire kingdom in ruins and even led to the death of King! Play as a fledgling new king who must rebuild your father’s kingdom back to its glory days with help from Pug after this tragic loss. Restore districts, renovate and expand your empire so you can bring peace and prosperity back to loyal citizens that have been longing for their homeland they once knew since before it all fell apart during invasion!

Rule your kingdom as the Idle King and manage a land of adorable Animal subjects with varied personalities. Meet interesting characters from across the lands, amass wealth through trade or gold mining to grow even more wealthy while away, invest in districts for increased profits that will be collected automatically by mayors you hire who are loyal vassals sworn to serve their king diligently.

With a swipe of your finger, you can rule over all the creatures in Kingdomtopia. These people will do anything for their king as long as they are given ice cream to eat and some rich resources along with fame across the land – so make sure that these mayors stay happy! Different types of animals have different needs too; pay attention to them when you’re giving out commands!