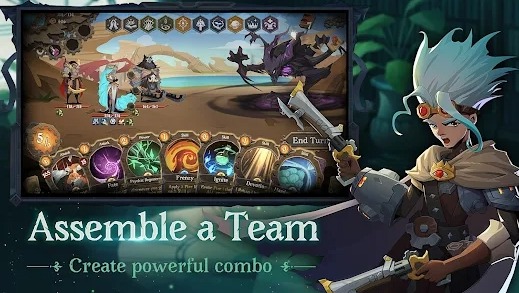 Indies’ Lies is a roguelike with a card game twist. The good news is that it’s a single-player experience that’s appropriately monetized.

The game also adds more variety to the deck-building process, allowing you to quickly swap cards as you progress. There are three maps to explore and three distinct classes for each hero.

Indies’ Lies is a rather polished single-player roguelike card game, as it is a fresh release.

Humans have become the “lords of all things” on land, from the original ancient clan of the Alrayans to the migrating Elruips and Normaasts, who were “exiled” to the end of the world. Humanity has developed a variety of civilizations, including alpine, plains, and nomadic.

The belief in old gods, such as Strockanos, was initially uniform throughout time despite the fact that there were disputes between civilizations and different religious denominations.

However, the arrival of the “new god” Indies, who not only brought a new religion but also a new “era” to human civilization and the continent as a whole.

​Different from typical DBG genre building, the developers have modified and optimized the card creation procedure in many ways. The original cards may be directly swapped in, and the free inlay runes keep the cards more theme-appropriate. The overall genre construction process will go more smoothly, allowing for greater numbers of players to enjoy DBG sooner.

Three distinct professions are anticipated to be accessible in the initial stage of the game. Each profession will have three characters available to play as, each with their own individual builds. Different sets of talents and lieutenants will be available for each different occupation or even different professions practiced by the same character.

In the game, players may invite up to two lieutenants to join their team. Lieutenants come in many shapes and forms, offering you more meat shields while also providing more rich and varied strategic alternatives to heighten the overall excitement of the game.

There are over 200 talents created to satisfy all of your future growth needs in different phases of various genres, with a talent tree that grows with you.

Unravel a Fascinating World is a narrative-driven puzzle game that tells the story of two siblings, Jack and Anna. You’ll play the adventure mode as one of many characters while discovering clues to unlock character-specific story modes, taking you even deeper into the mythology caught between old and new gods’ beliefs.