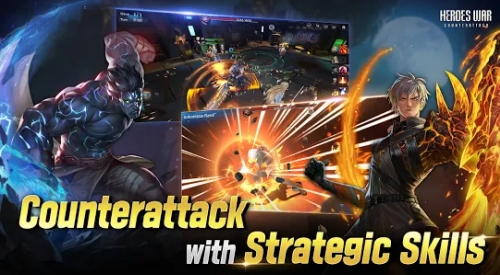 Heroes War: Counterattack is a perfect combination of turn-based RPG and action genres. You will recruit mercenaries, collect equipment, and upgrade skills/abilities to be come a hero of every battle.

The Z-virus has killed more than a third of the world population, turning the world in to chaos. Prepare for an epic battle in this post-apocalyptic world with characters fighting for different sides!

Battle with friends and guild members on an adventure. They will help you get new things like weapons or power up your skills, so that you can become the hero in this game. In Heroes War, you can battle in a campaign, go into dungeons or fight in the arena. You can also take advantage of planning strategies and using skill to defeat your enemies.

You can use the Mercenary facility to upgrade your current mercenaries and recruit from a group of different heroes each time, in order to maintain an advantage on enemies, customize the skills of your player-controlled mercenaries to become a hero in the Arena.

The game has a realistic battle system, where you can control your character and attack from any direction. Use the Rage Skill for counterattacks in real time battles that change directions as you combine attacks! Master exciting combat gameplay when fighting against players from around the world!

To get all the achievements you need to group up with friends and play cooperatively. And joining a guild can make it easier to complete missions as well as enjoy friendly matches.