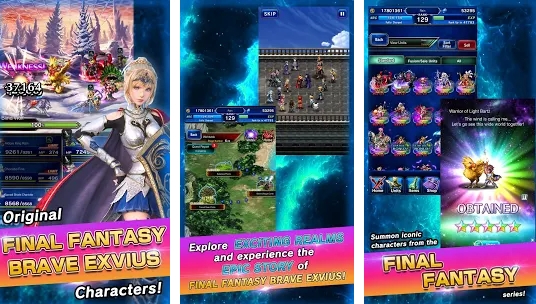 The Final Fantasy Brave Exvius Tap is one of the most enjoyable gameplay that you can access on the Facebook Messenger app. It comes up with the official characters of the Square Enix’s hit mobile game. But the mechanics of the game has been simplified. The only thing that you should do to attack your enemies is to make several taps.

Your main goal while playing the said game is to ensure that your chosen hero can get rid of the numerous enemies as you can. The game will enable you to unlock 25 characters. You can customize these characters depending upon your playing style. The game features more than 1000 stages that you need to complete.

Even though the mechanics of the game has been simplified, it is still equipped with actions. It only means that you need our guide about the Final Fantasy Brave Exvius to make sure that you will win the game. So, without further ado, let’s get started!

Play on a Mobile Device

You are allowed to play the Final Fantasy Brave Exvius Tap on your mobile phone and computers. It is because of the fact that it is a Facebook-based game. But most of its players recommend playing the game on your mobile to be more effective. The endless clicker games, such as the Final Fantasy Brave Exvius Tap is specifically designed for tablets and mobile phones. It only means that when you might have a hard time when you play it on a laptop or a computer.

The Final Fantasy Brave Exvius Tap will provide you with a new set of characters for each level you’ve completed. Each team should have six members only, which include Rain as one of your characters. After completing your team, you can now switch to any character you have, which you think is one of the strongest of them all. Also, make sure that you will get the gears of those heroes that you will not be used to share it to your party members.

Use the Right Element

Some of the weapons on the game are effective compared to others. This will always depend upon your enemy. When you use the right element when battling with your opponent, you can ensure that they will receive more damages. Also, make sure to keep an eye to your enemy’s icon. The icon will show the strength of your opponent.