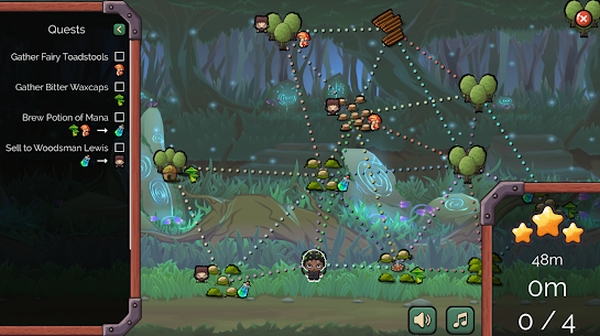 Fetching Alchemist was featured in April, 2021 of Puzzle
Download

Another great game to help you pass time, Fetching Alchemist is one of the few games that don’t contain ads or in-game purchases. This is a puzzle game that requires the player to visit places for their quest in the most efficient manner. To do so, you should need to gather ingredients trade resources, and gather portions as you traverse the universe. The main goal here is to arrive at your destination without breaking a sweat, and that means finding a shortcut.

The game’s most important feature is that it has added localization for Malay. Additionally, there is the latest version that has additional features you’ll love. This game’s size is only around 28MB. The most intriguing thing about this game is simplicity hidden in complexity. If you thought you could get three stars on one level easily, you will be in for a rude shock. It will take you several attempts to achieve that. Luckily, the game is so interesting that you wouldn’t mind trying over and over again until you solve that puzzle. Bored? Indulge yourself in Fetching Alchemist and you won’t get disappointed.