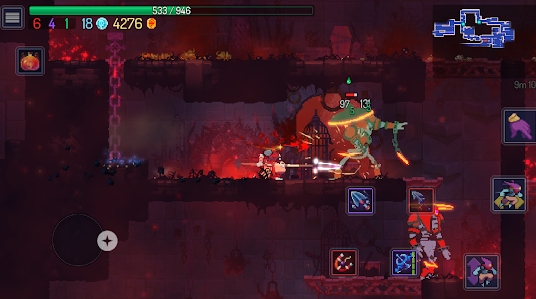 Dead Cells was featured in June, 2020 of Action, Platformer
Download

Dead Cells is one of the entertaining action games, where you will have a 2D combat using your different skills and weapons. The game includes two modes- Auto-Hit and Original. On the redesigned interface, you can use custom controls and touch control options.

Dead Cells is a two-dimensional platformer, roguelike that requires you to practice frantic combat with various weapons and skills against unpredictable enemies.

Dead Cells is a roguevania game with the replayability of rogue-lite and the adrenaline pumping threat of permadeath.

The game feature immersive and frantic 2D action. You need to learn the patterns of your enemy, or be sent back to your cell before you have time to say “baguette”

New levels are unlocked every time a player dies. Players have the choice to explore another path that suits their current build or playstyle, or just exploration for discovery. Surely, the ramparts can’t be as bad as the sewers, right?

Dead Cells is a game for you to enjoy on the go, either by casually exploring or finishing it all.