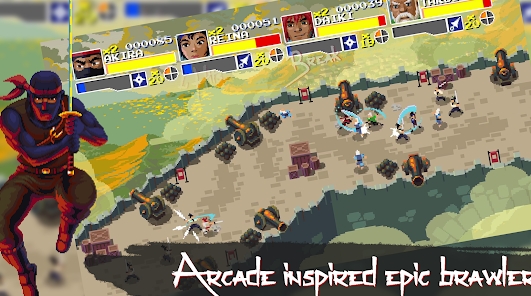 Clan N was featured in March, 2021 of Action
Download

Beat them up with an unmatched battle plan and tact. Clan N provides you with a combination of classic arcade gameplays and modern brawlers to help you beat your enemies hands down. The game’s main story happens in 7 levels with different enemies. The game’s main features include clean pixel-based graphics and 4 boot players.

Clan N is an ancient samurai group in the region called Far East. They are sworn to protect the realm from people who want to destroy it. Akira is a ninja with shinobigatana (a sword that has a short blade). Reina uses a staff and can use magic.

Clan N is a fighting game that blends the classic gameplay style of arcades with modern brawlers. In this game, you will have to dodge, block and use your light, heavy and special attacks wisely. It has an ancient far east theme with 7 different levels. You will meet many enemies that are challenging in the middle of the game and end level bosses.

Clan N can be played via touch interface or with a connected gamepad. When you start playing the game, a tutorial will show you how to do it. You can choose what input method you want from the settings.