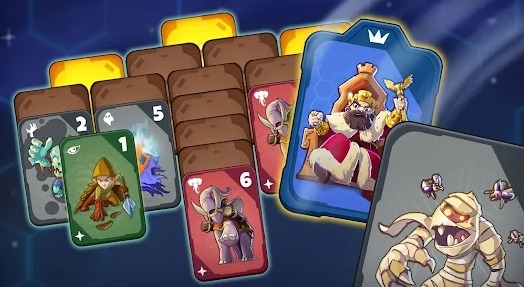 Cards of Terra was featured in August, 2021 of Card Battle
Download

You play as an alien stranded in a fantasy realm and must collect enough magical cards to earn your ride home. The princess can use her psi-powers control her enemies. You need to remove the enemies from your path to salvation by dragging and dropping them.

Cards of Terra is a vast and inventive one-handed RPG for mobile devices. Play solo or co-op, with up to four players per team. Explore an epic world by gathering treasure, slaying monsters and encountering classic fantasy characters!

Craft your own unique deck with over 70 unique cards that gain power as you level up in the campaign. Level up your heroes via combat or crafting: explore endless tower levels; defeat 9 bosses; fight hordes of powerful enemies!

Assemble powerful decks for Draft mode, where you can work towards challenging deckbuilding gameplay goals while building an army of diverse units in order to take on opponents across Terra – and earn valuable rewards along the way!