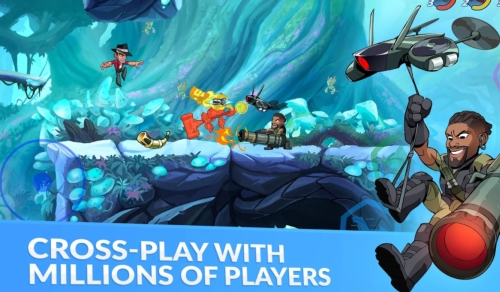 Brawlhalla is an arena platform fighting game heavily inspired by Super Smash Bros. You can play with 7 other players in real time, complete various missions, or create separate rooms where you will play with your friends. There are 50 completely unique characters in the game to choose from. Brawlhalla boasts 40+ million players.

The game features multiple 1v1 and 2v2 game modes. Those modes includes both online and offline plays. The online play has ranked, custom game rooms, while the offline play has local matches and offline tournaments against an AI. The game supports PC, mobile, and console cross-platform play, and supports both controllers and keyboards on mobile.

In Brawlhalla, the objective of a battle is to deal damage the opponents via different attacks and weapons until they fly off of the platform. The game features over 50 distinct heroes with unique abilities and weapons for players to choose from.

The controls work well on mobile, which means the game’s experience on PC and console are almost perfectly ported to Android OS.

There are eight free heroes which are rotated weekly. The rest can be unlocked using in-game gold or through iAPs.