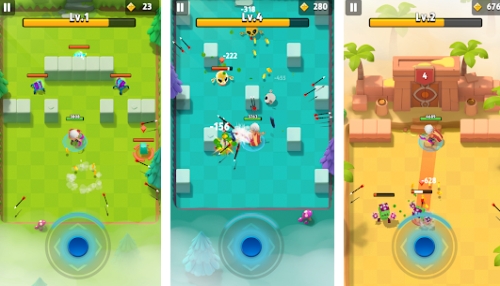 Archero is Archer Hero. You will play as an archer who can shoot arrows or throw anything from a boomerang to a scythe in beautiful worlds and hundreds of maps. Each play offers random and unique skills to help you crawl these dungeons. Archero is a game developed by Habby, the same developers who have developed another game called Flaming Core. Archero is a game where you play as an archer, as you could’ve guessed from the name. You take this archer on a quest to defeat evil monsters progressing through each chapter.

Do you like roguelite games? Well, I’m pretty sure you are. I’m also pretty sure that you’ve heard of the game Archero. If you’re a beginner, there are definitely a lot of techniques and strategies that you probably don’t know of yet. Anyway, before we get to the tips we have in store for you, let’s talk about what this game, Archero, is about.

Now, the moment we’ve all been waiting for, what are the tips and tricks that you can use so that you can be an absolute boss in this game.

Tip #1: There are abilities that the main character can do when you’re starting off, probably not a lot. In every battle, you need to choose wisely which abilities you should choose to defeat your enemy.

After leveling up in game, you can choose an abilities. Choose among the following skills to boost your heroes the most:

Tip #3: Be quick! You must control your character to switch between moving and standing – moving to avoid all enemies and dodge their projectiles, standing to attack and kill off enemies.

Tip #4: Most games have a kind of currency, and this one definitely does have that. This game has two currencies but let’s focus on one for now which are coins. When you defeat an enemy, you usually get coins as a reward, and with these coins, you can upgrade a ton of your stuff and talents.

Tip #5: Now, the other currency that this game has for you are gems. Unlike coins, you can only get gems whenever you level up. Gems are much rarer compared to coins, and you should never spend them on just anything. The best way you can waste your gems is by using it to revive your character or buying a hero that suits your style. Then if you start to save a lot, open Epic chest to get Epic equipment.

Tip #6: Once a while you will encounter the Devil which offer you a skill at the cost of your health. If the skill is worthy such as Extra Life, sacrifice your health to get it.

Tip #7: Fuse and upgrade equipment when you can. Fusing raises equipment’s quality. The higher the quality it is, the higher max level it can reach while offering more skills. Upgrading equipment increases the hero’s hit points and attacks, which help him beat the dungeon easier.

Tip #8: Do not take more than 1 Multishot and 1 Front Arrow. Most people think that the more of these skills they obtain, the stronger the attack become. Each obtained skill reduces attack, and can make it hard to hit an enemy with all arrows (Front Arrow)

This is the end of the beginner’s guide that, hopefully, you do find helpful. Good luck on your journey.