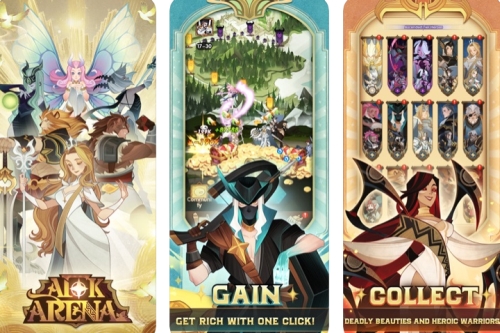 The game features  a beautiful world full of epic tales and exciting adventures. Players will choose heroes from 6 factions to form a team and participate in an endless adventure or fight against the others in arena and tournament.

If you are looking for the best AFK Arena tips to get started into the game or advance further, you will find the most informative tips in this post.

Ascended Tier Heroes are one of which tier starts at Elite. They are strong and are the core components of any team. Only sacrifice Legendary Tier Heroes when ascending a hero to higher tier.

This is the most important tip because most new players don’t know what they can do with Ascended Tier heroes and discard them carelessly.

#2) Use Fast Rewards near the end of the day

Fast Rewards gifts you 120 minutes worth of experience and gold. The amount depends on how far you’ve beaten your Campaign.

It is OK to use this feature If you feel like there won’t be any advance in Campaign today.

This is one of the best feature in mobile game. It allows less grinding while keeping versatility of forming teams.

Heroes put Resonating Crystal will have the same level of the hero at 5th highest level.

Ascending heroes require strategy. You must have a vision of how your team want to be. Keep ascending every available hero is a waste. Keep resource for the best ones.

#5) Spend gems in Summoning and Star gazing only

Don’t use gems to buy gears. Spending gems to get heroes is the best solution. When you have lots of gems, you can use them to buy Hero Essences.

The store re-fills 500 Hero Essence which can be bought with Gold daily. If there are other Essence package which requires gems, buy them as well.

Retiring green heroes bring in resources. They are only useful in this matter. You can enable “Automatically Retire New Common Heroes” in Rickety Cart.

The further you advance in Arcane Labyrinth, the more resources you get. So try to beat all 3 floors.

In battle, if you see your team would get defeated, Pause and Try Again to choose a suitable team.

Peaks of Time is feature in AFK Arena which gets unlocked once players passed the Campaign Chapter 6-4 and offer players with more resources and Artifacts depends on how far players go in each chapter. Each chapter in Peaks of Time is a puzzle and maze.

Redemption code can bring players with lots of free resources and gems. These are available ones: